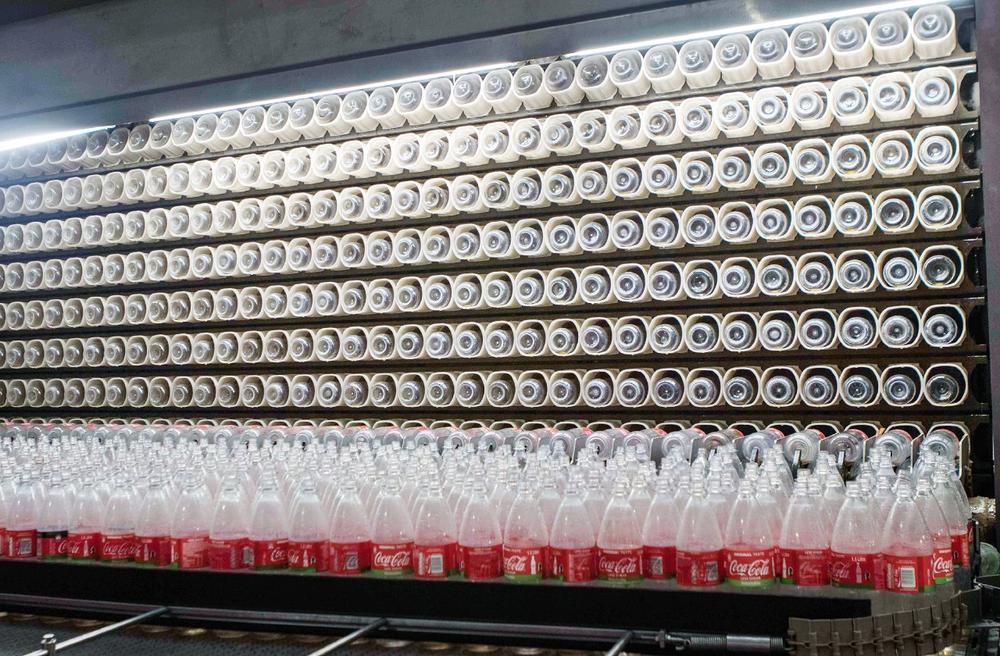 Coca-Cola Peninsula Beverages (CCPB) consistently focuses on reducing its footprint in a region where climate protection is already a matter of survival. This South African bottler gets support through resource-saving technologies from KHS – made in Germany.

Although there are apparently still some people who express doubts about climate change, large parts of Africa in particular have long been suffering from its very palpable effects: steadily decreasing rainfall and rising temperatures have been causing devastating droughts and extreme famines since 2015, especially in the southern part of the subcontinent. Malawi, Zambia, Namibia, Zimbabwe and Botswana are among the countries affected.

Water crisis
South Africa – a country more associated with the lush green fruit and wine-growing regions of the Cape region and the subtropical forests of the east coast – has also been hard hit by the absence of the usual summer precipitation. All the more surprising was the reaction of the world at large to the water crisis in Cape Town which brought the metropolis to the brink of disaster in early 2018: the shutdown of the public water supply. “We were very close to Day Zero,” recalls Greg Morse, manufacturing and supply chain director at CCPB, the region’s leading soft drinks bottler. “From this point on, each person would’ve only been allocated 20 liters per day which they would’ve had to stand in line for, armed with plastic containers.”

The emergency could only be averted at the last minute by implementing rigorous measures. Water consumption was limited to 50 liters per person in comparison to the 300 liters consumed per capita per day in the United States. Toilets are flushed only when absolutely necessary and with rainwater if possible. Hands are washed less frequently and instead disinfected more often. The price of water doubled within just three months. The agricultural sector is also contributing by reducing its water consumption by 50%. This has led to a loss of jobs for 37,000 people and a drastic increase in food prices.

Focus on sustainability
As large water consumers, beverage bottlers such as CCPB are particularly under the scrutiny of the public in situations as dramatic as this. “We’re of course expected to set a good example,” explains Morse. “We have to be accountable to our customers and the public – not only in times of crisis, but every single day.”

The beverage manufacturer sees the awareness of corporate social responsibility as a key success factor for a very good reason. “The full focus is on sustainability,” Morse emphasizes. “We’re working relentlessly to minimize our carbon footprint at all levels. We started doing so in the early 2000’s by combining the four manufacturing plants within our territory to form a mega manufacturing facility in Parow Industria, a suburb to the east of Cape Town.” Today, this includes activities such as Coca-Cola’s “World Without Waste” program, with which, by 2030, the company plans to collect and recycle as many bottles and cans from refuse as can be sold worldwide. CCPB is involved, for example, in organizations that want to expand the recycling of PET and glass bottles in South Africa. This is a logical step considering that the bottler makes its own preforms and is desperately searching for rPET in order to achieve its goal of using an average of 25% recycled material. Even the PET bottles for the Bonaqua water brand are made of 100% recyclate.

Returnable bottles benefit all
CCPB’s sustainability strategy also includes using more returnable bottles made of both glass and plastic than some of its competitors: the share of the product range is currently around 20% and should reach 40% by 2025. This not only significantly helps to prevent waste and thus achieve ecological sustainability but is also viable from an economic standpoint. If a refillable PET bottle is returned, the product is sold for about 30% less – benefiting not only price-sensitive consumers but also the company itself, as in doing so it’s able to reach wider groups of buyers.

The returnable PET bottles are produced on a KHS InnoPET Blomax V stretch blow molder that was put into operation in 2019 – one of the first ever on the market. It scores above all with resource savings and a production process with a significantly smaller carbon footprint. Thanks to its optimized near-infrared (NIR) heater, this machine from the latest generation of KHS stretch blow molders consumes up to 10% less energy. The AirBackPlus air recovery system also included in the returnable bottle blowing process uses up to 40% less high-pressure air. The new technology also saves on resources when it comes to material consumption: the improved material distribution of the stretch blow molding process now uses the PET located below the neck ring that to date has remained unstretched, enabling lighter preforms to be used.

Trust in technology
“We’ve had a good business relationship with KHS for more than forty years,” is how Morse describes relations with the Dortmund engineering company; you can sense the unshakable confidence in the company’s technological expertise accumulated in this time. “We purchased fillers from KHS, for instance, even back in the days of predecessor company SEN. And if bottle formats like the 1.0-liter glass bottle were still on the market today, I’m certain that the machines would still be in operation.”

“We don’t limit ourselves to just delivering machines,” explains Stephan Mürset, regional sales manager at KHS. “We maintain an intensive dialog on an equal footing and understand the specific needs of Greg and his colleagues, for example concerning matters such as CCPB also producing bottles for other bottlers. We have a very similar understanding of technical issues.” Morse confirms that they’re on the same wavelength. “The price isn’t our sole guideline; we buy from people. Of course the technology has to be right; we were really impressed by the simple functionality and downright solidity of the equipment we saw in action at the KHS factory,” he adds.

However, the good relationship thrives not only on sophisticated technology but also on the system provider’s strong service presence in South Africa. “We have a very efficient team here at the Cape,” emphasizes Mürset. “Our local engineers carried out the installation and commissioning work.” The highly competent specialists, some of whom were trained in Dortmund and some at KHS’ own training center in Johannesburg, are of course also available during ongoing operation for activities such as audits, maintenance or repairs.

Exemplary water management
A major issue in connection with sustainability in South Africa is of course the responsible use of resources – water in particular. Water-saving technology helps in the production process: this modification was successfully completed with two new bottle washers the Dortmund system provider installed and put into operation in Parow last year. One of the machines processes returnable PET at respective capacities of up to 26,400 1.5-liter bottles an hour and up to 19,200 2.0-liter bottles per hour. The other washes up to 36,000 returnable glass bottles an hour with volumes ranging from 300 to 500 milliliters. Thanks to a number of innovations, each of the two uses about 25% less water than their predecessors. Based on this investment and a number of other measures with which CCPB achieves remarkable results, they have greatly helped to save on resources by reducing the water consumed per liter of finished beverage from 3.6 liters to 1.7 liters within the past twelve years.

Since some of the water used comes from their own boreholes, the focus here is also on sustainability in the sense of constant replenishment of the wells. The suitability of each borehole is tested in advance by geological institutions, only 50% of the permitted delivery rate is utilized and pumping is carried out at certain intervals to enable the groundwater to regenerate. Before it’s used to produce beverages, the water is filtered through a nanofilter in six cleaning stages to ensure top-quality water.

Greg Morse is particularly proud of CCPB’s conscientious use of scarce water resources. “There’s absolutely no reason why we shouldn’t be pleased with our achievements. On the contrary: at the end of last year we and two other companies were awarded a five-star water rating by the City of Cape Town for our exemplary water management.” This commitment also includes participation in various regional initiatives, which among other things ensure that more people have access to clean drinking water.

No happy end in sight
When the long and persistent rainfall finally began in the Cape region in June 2018 – shortly before the continuously postponed Day Zero – the water levels in the reservoirs slowly rose. This by no means signals a happy ending, however: due to climate change, the people of Cape Town are well aware that droughts can be expected in the future. This is why they continue to exploit all options of using water conscientiously and economically as an invaluable resource. With the help of smartphone apps, the population is constantly kept up to date on the water levels in the reservoirs. Water consumption in the city today has leveled out to between 600 and 800 million liters since the peak of up to 1.2 billion liters per day before the droughts of 2015 to 2018. The entire industry is also investing in technologies to increase its water efficiency. CCPB intends to maintain its position up among the pioneers. “We should never find ourselves in this situation again,” Greg Morse is convinced. “People are much better informed and clearly aware of their responsibilities. Cape Town mastered this challenge very well; other cities with comparable general conditions can benefit from our experience.”

• Capacity-dependent fresh water control: Adjustment of the fresh water supply to the current machine capacity by a control valve. Advantage: Much less fresh water consumed at a reduced machine output

The KHS Group is one of the leading manufacturers of filling and packaging systems for the beverage and liquid food industries. The KHS Group includes the following companies: parent company KHS GmbH, KHS Corpoplast GmbH and numerous subsidiaries outside Germany, located in Ahmedabad (India), Sarasota and Waukesha (USA), Zinacantepec (Mexico), São Paulo (Brazil) and Suzhou (China).

KHS manufactures modern filling and packaging systems for the high-capacity range at its headquarters in Dortmund, Germany, and at its factories in Bad Kreuznach, Kleve, Worms and Hamburg, where the group’s PET expertise is pooled. The KHS Group is a wholly owned subsidiary of the SDAX-listed Salzgitter AG corporation. In 2019 the KHS Group and its 5,149 employees achieved a turnover of around €1.260 billion.