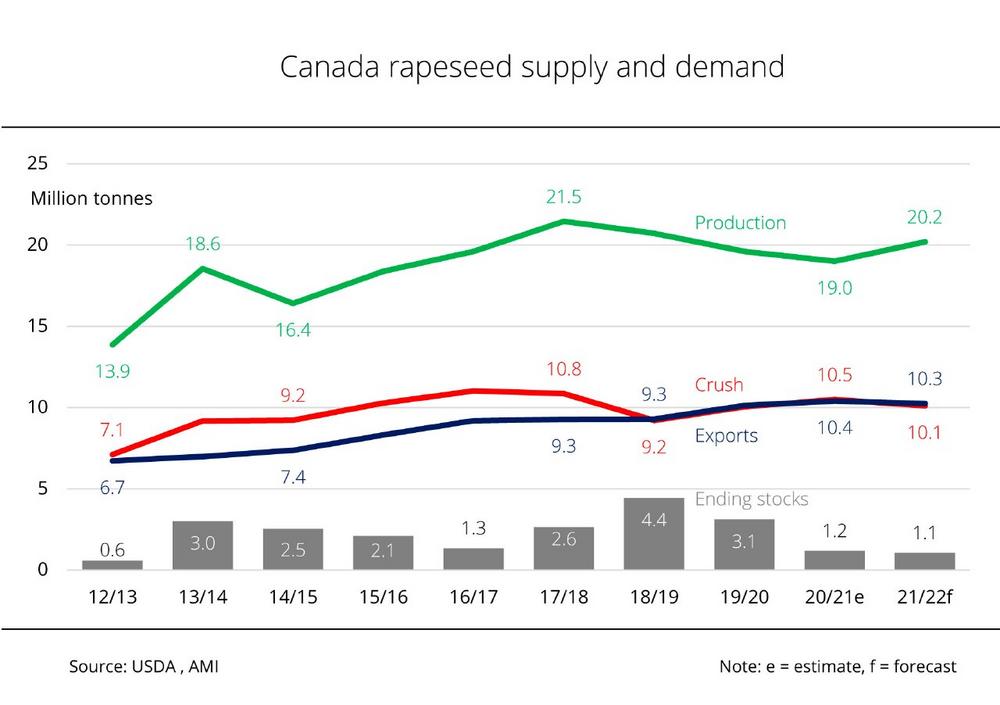 Prospects of tight rapeseed supply at the world’s biggest rapeseed exporter has driven up prices also in the EU, a major recipient of Canadian commodity.

In Winnipeg, the July contract reached a new record high at the equivalent of just less than EUR 661 per tonne on 13 July 2021. An exceptional increase had already been recorded in the days before, the limit-up price and the biggest possible gain in one trading day having been reached. In other words, rapeseed rose around EUR 100 per tonne in Canada in a single week.

The surge was driven by expectations of heat-related crop failures in Canada, the world’s largest exporter. Continued high temperatures and drought in the Canadian plains have severely affected the development of the rapeseed plants. This will limit the yield potential. In its most recent estimate, the USDA lowered its yield forecast to 22.4 decitonnes per hectare based on reports from Canada. This level is below the long-term average. As a consequence, the potential output is also reduced. The estimate was lowered 0.3 per cent from the previous month to 20.2 million tonnes. The extremely scarce supply of Canadian rapeseed had led to a strong upsurge in prices already in the weeks before. However, such upsurge will hardly dampen demand. The EU alone will need 0.15 million additional tonnes of rapeseed from abroad because its own supply is inadequate.

The Union for the Promotion of Oil and Protein Plants e. V. (UFOP) represents the political interests of companies, associations and institutions involved in the production, processing and marketing of domestic oil and protein plants in national and international bodies. UFOP supports research to optimise agricultural production and for the development of new recycling opportunities in the food, non-food and feed sectors. UFOP public relations aim to promote the marketing of domestic oil and protein plant end products.