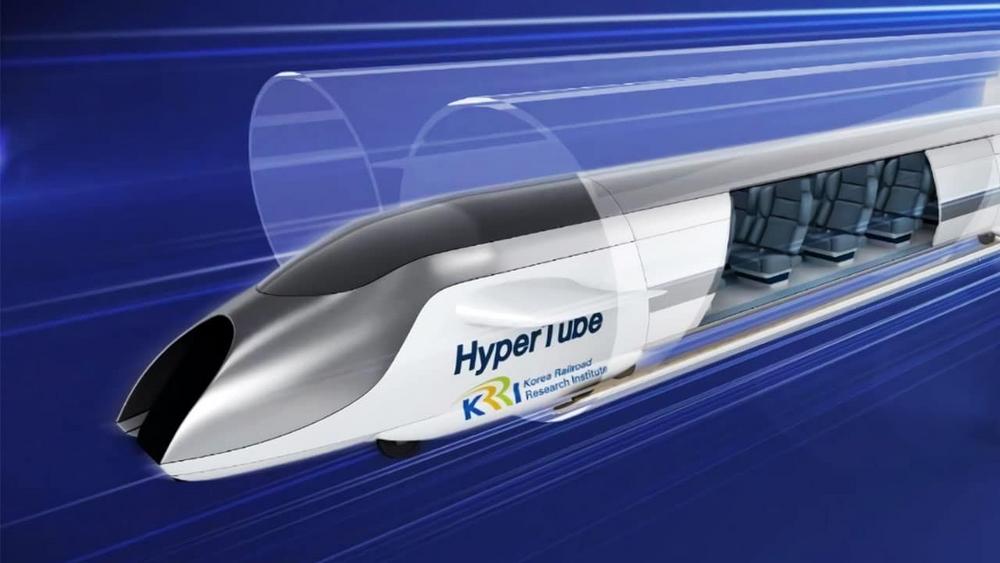 The Korean Railroad Research Institute (KORAIL) recently announced that its Hyper Tube Express (HTX) train achieved a speed of over 1,000 km/h (621 mph) during a test, marking a significant achievement in the race to create the world’s fastest train system. The HTX is an ultra-fast transit system that moves trains at near-supersonic speeds by leveraging the magnetic levitation principle inside a tube under partial vacuum – a concept similar to Elon Musk’s Hyperloop design. To test their concept, KORAIL developed a 1:17 scale test model.

Key to the propulsion technology is an electric air compressor fan on the front of the Hyper Tube Express, which will transfer high air pressure from the train’s front to its rear and sides. The fan reduces friction in front of the train, helping propel it and create an air cushion around it to reduce the air friction and the air resistance when the train moves through the vacuum tube. During the scaled model testing, pressure, temperature, and velocity data are gathered for air resistance analysis and the air compressor’s design optimization. Also, vibration data is acquired to study the train’s stability and proper acceleration moving at super high speed.

The scaled test track has a total length of 60 meters and is divided into three sections for accelerating, cruising, and braking. KORAIL distributed a Gantner Instruments Q.bloxx data acquisition (DAQ) system along the vacuum tube to collect, process, visualize and save measurement data. The main criteria for selecting the Q.bloxx system was the powerful combination of distributed, mixed-signal data acquisition and precise time synchronization between DAQ modules.

Accurate velocity measurement is paramount to the success of the test. The maximum speed is measured in the acrylic tube’s cruising section, where the scale model travels a length of 20 meters. The cruise speed is calculated using several fiber optic sensors mounted at precisely measured intervals along the vacuum tube. Each fiber optic sensor provides a +24V pulse with a response time of 10 µs when the model train passes it and is directly connected to the digital inputs available on the Q.station controller. The velocity is calculated in real-time on the Q.station controller by taking the distance traveled over the change in time.

The HTX scale model reached a record-breaking speed of 1,019 km/h (633 mph) at 0.001 atm during testing. The institute plans to refine its technology further before initiating demonstration research for actual track and vehicle development in 2022. KORAIL’s ambition is to deploy a full-scale Hyper Tube Express network by 2024, cutting the journey time between Seoul and Busan from 3.5 hours to around 30 minutes.

DAQ modules used for this project: